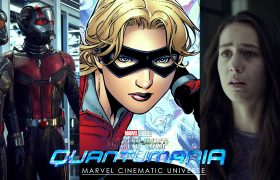 Ant-Man and the Wasp Quantumania: Scott still needs to put his life back together – granted, he does that constantly. This time, though, he is an acknowledged hero, which should help some. Although, one imagines his relationship with Cassie (Kathryn Newton, taking over from Emma Fuhrmann) will be fairly different.

Ant-Man and the Wasp Quantumania

The third Ant-Man movie that will seemingly involve a lot more of the Quantum Realm that we briefly entered in 2018’s Ant-Man and the Wasp. Of course, Paul Rudd’s Scott Lang/Ant-Man and Evangeline Lilly’s Hope van Dyne/ Wasp will return, as will their original older counterparts, Hope’s parents Hank Pym and Janet van Dyne, played respectively by Michael Douglas and Michelle Pfeiffer. also, Hope (Evangeline Lilly), Hank (Michael Douglas), and Janet (Michelle Pfeiffer) will need to adjust to life after returning from the Snap. But their attempt at finding a new normal will be upset by the arrival of Kang the Conqueror (Jonathan Majors), a time traveler with a fantastic connection to the Marvel universe.