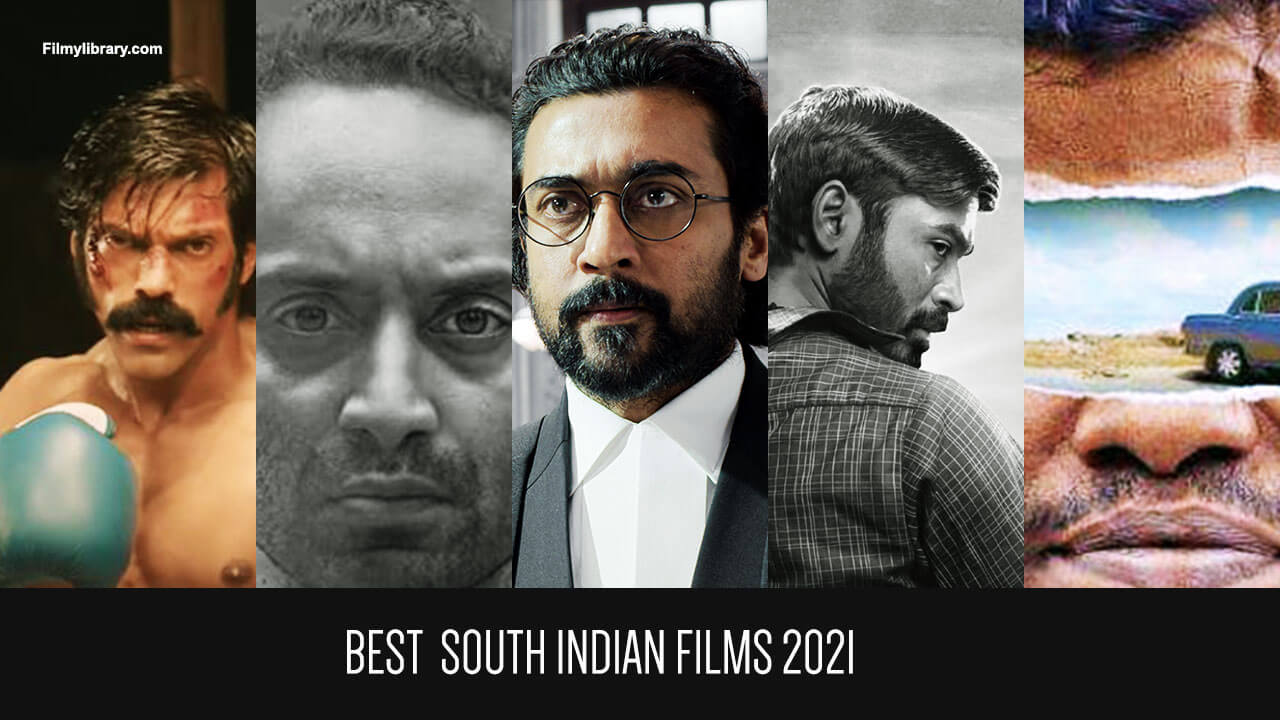 Joji was directed by Dileesh Pothan, and this is his second directorial film Written by Syam Pushkaran. Joji’s character, played by promising actor Fahad Faasil and accompanied by Baburaj, Basil Joseph, Dileesh Pothan, Unni Maya Prasad, Shammi Thilakan. The storyline of “Joji” is an engineering dropout and the youngest son of a rich family who lives with his aspirations of becoming super-wealthy. Driven by greed and blind ambition, he decides to execute his plans following an unexpected event in the family.

Karnan Tamil-language action drama film directed by Mari Selvaraj, and this is his second directorial film after blockbuster hit Pariyerum Perumal. Dhanush played Karnan and was accompanied by Dhanush, Rajisha Vijayan, Lal, Yogi Babu, Natarajan Subramaniam. Karnan’s storyline is a fearless village youth, must fight for the rights of the conservative people of his village, due to the torture given by a police officer.

One of the Must watchable Best South Indian Films 2021, Jai Bhim Tamil-language film directed by T. J. Gnanavel, Suriya as Chandru, an advocate who is dedicated to fighting for Rajakannu justice. K. Manikandan played Rajakannu and Lijomol Jose as Senggeni, Jai Bhim Storyline the trials of a pregnant woman from an oppressed tribe as she seeks justice for her husband who was arrested, brutally tortured, and murdered after being implicated in a false case. the film has garnered critical and commercial acclaim and earned a 9.6 IMDb score.

Sarpatta Parambarai is a 2021 Indian Tamil-language sports action film directed by Pa. Ranjith, Sarpatta Parambarai star cast Arya, Dushara Vijayan, Anupama Kumar, John Vijay, Pasupathy other best-supporting artist given their unforgettable performance. The movie storyline was Sarpatta Parambarai is challenged to a do-or-die match, will Kabilan, a young laborer, put on the gloves himself and lead his clan to victory, or be dissuaded by his disapproving mother and dangerous politics.

Best South Indian Films 2021: Mandela another milestone of Tamil cinema written and directed by Madonna Ashwin on his directorial debut. Yogi Babu as Nelson Mandela’s character best his career performance until now, Mandela storyline is A local barber’s fate turns overnight when he becomes the single deciding vote in the village elections.

Thaen 2021 Tamil film An uneducated beekeeper leads a happy married life with his woman in a village. However, in a cruel twist of fate, she ends up contracting a rare disease that can kill her. Thaen film Directed by Ganesh Vinayakan, Written by Rasi Thangadurai, Starcast Tharun, Abarnathi, Aruldoss.

Nenjam MarappaNenjam Marappathillai critical failure film but Selvaraghavan takes the different kinds of horror genre film, That’s why film library put this movie on this list. Nenjam Marappathillai’s story plot is A god-fearing young woman who takes up the job of a caretaker in a rich household tries to take revenge on her lustful employer. Starcast by S.J. SuryahNandita, Shwetha, Regina Cassandra.

Malik 2021 Malayalam language political thriller film directed, written, and edited by Mahesh Narayanan. Starring Fahadh Faasil, Nimisha Sajayan, Vinay Forrt, Dileesh Pothan, Joju George, and on the other side of the film, the supporting artist has given their unforgettable performance. Malik 2021 film storyline is A past ridden with crime, death, and pain is recounted to Freddy, a juvenile criminal, who has been assigned to eliminate his estranged uncle Sulaiman, an aging patriarch, while behind bars. in malik film you will be remembered Kamal Haasan “Nayagan” film.

Best South Indian Films 2021: Drishyam 2: The Resumption, or simply Drishyam 2, is a 2021 Indian Malayalam-language drama thriller film written and directed by Jeethu Joseph. after huge success, Drishyam film make the second part, and it a blockbuster hit. Mohanlal played as Georgekutty and on the other hand, Meena, Ansiba Hassan, Esther Anil, Murali Gopy, Asha Sarath, Siddique give an extortionary performance.

The Kerala Police has been secretly investigating the Varun case and Georgekuttyfamily which is threatened by it. the film gives a thrilling environment so the audience is Eagerly watched every scene

Best South Indian Films 2021: Nayattu political thriller film directed and co-produced by Martin Prakkat and written by Shahi Kabir. The Three police officers are on a run for life, escaping the outbreak against them due to the unlawful arrest and torture of a civilian. It brings in a few shades of arrogant yet very much human police officers and their helplessness. Nayattu film starring Kunchacko Boban, Joju George, Nimisha Sajayan, and other co-actor. Nayattu fil well worth a watch for the whole family, with its mix of police story, personal drama, and message on our politics

Irul 2021 Malayalam mystery thriller film, Naseef Yusuf Izuddin directorial debut directed film. When a car breakdown forces a couple to seek shelter in a nearby home, conversations with the stranger inside soon suggest there’s a killer among them. The best thing that can be said about Irul is that it made you very curious enough to watch till the last minute. Fahadh Faasil, Soubin Shahir, Darshana Rajendran, their given It was a great performance.

Ikkat Kannada 2021 film, it’s a romantic comedy entertainer movie directed by Esham Khan and Haseen Khan. A couple on the verge of divorce has to stay together during the lockdown as a nasty surprise awaits them. The movie casts Nagabhushan and Bhoomika Shetty are in the lead roles along with surprising characters RJ Vicky, Sundar, Anand Ninasam is seen.

Best South Indian Films 2021: Kala is a psychological thriller that revolves around Shaji who faces an intriguing conflict with the many-layered shades of human behavior. Kala is a thriller film directed by Rohith V. S. and written by Yadhu Pushpakaran and Rohith. Sumesh Moo and Tovino Thomas are pillars of strength in the Kalla film because they while maximum performance shown

Jathi Ratnalu 2021 Telugu-language comedy-drama film written and directed by Anudeep.The plot revolves around the three prisoners. They get released and plan for a happy life outside. Things take a new turn and bring in a twist. Naveen Polishetty, Rahul Ramakrishna, and Priyadarshi And that one-liner are enough to describe the film best.

The Great Indian Kitchen is one of the milestone films in the Malayalam industry and won the 51st Kerala State Film Award for Best Film. After marriage, a woman struggles to be the submissive wife that her husband and his family expect her to be. The story follows her journey, as she changes herself and, even more so, changes the household. Nimisha Sajayan, Suraj Venjaramoodu, and other best-supporting artists have given their greatest performance, and this is the another Must watchable Best South Indian Films 2021.

In the end, the fast-paced thriller Kuruthi leaves us with a powerful message of why all of us have this lust for blood and why the fight of us vs them will always end in doom.

In the Best South Indian Films 2021 another movie is home, A Malayalam comedy-drama film directed and written by Rojin Thomas. Oliver Twist wants to be tech-savvy and become a better companion to his two sons who spend more time on their phones than with their loved ones Indrans as Oliver Twist, masterpiece performance. The supporting cast of Srikant Murali, Vijay Babu, and KPAC Lalitha, among others, lend heft to the film.

Best South Indian Films 2021: Sara Vincent is a girl in mid 20’s who has no desire of giving birth to a child. Associate director Sara is struggling to do her first project. Will she be able to succeed with her decisions and get things right? and sara film story compels us to think. when anna ben played sara’s character as the film goes in another direction. Sara film was directed by Jude Anthony Joseph and written by Akshay Hareesh. sara is well worth a watch for the whole family,

Best South Indian Films 2021: Thalapathy Vijay and Makkal Selvan Vijay Sethupathi starer Master 2021, Master film plot An alcoholic professor is sent to a juvenile school, where he clashes with a gangster who uses the school children for criminal activities. Lokesh Kanagaraj is fast growing into one of the most exciting filmmakers in Tamil cinema. After proving his mettle with films such as Maanagaram and Kaithi, now also master movie blockbuster hit

Best South Indian Films 2021: Aelay Tamil comedy-drama written and directed by Halitha Shameem, Aelay film was A neo-realistic comedy set in a rural town, exploring the relationship between a father and a son. There is genuine warmth in the storytelling and the film

Best South Indian Films 2021: Vaazhl film is Arun Prabu Purushothaman’s second venture, a film about inner search, through travel and journey to discover your true self. Vaazhl film Starring Jayam, Pradeep Anthony, T.J. Bhanu, and other co-artist give the best performance. Vaazh one of the well worth a watch for the whole family,

Best South Indian Films 2021: Uppena Telugu film written and directed by debutant Buchi Babu Sana. A fishing community falls for a village head’s daughter, but they face violent opposition from the girl’s doggedly old-fashioned father. The debutants Vaishnav and Krithi manage to pull off the intricacies of their characters well for the most part. Devi Sri Prasad’s music and cinematography by Shamdat add to the film’s overall mood.

Best South Indian Films 2021: Rathnan Prapancha this not a film, it’s showing the life of us. an average middle-class guy in his late twenties, who is stuck in a house with his mother, Saroja. Just when things couldn’t get any worse, Ratnakara gets a phone call that turns his life upside down. Dhananjay played Rathnakara’s role and smashed.Rathnan Prapancha is well worth a watch for the whole family,

We believe that you will watch these Best South Indian Films 2021 movies, Thank you

What are the Best South Indian Films 2021, and Where to Watch Them