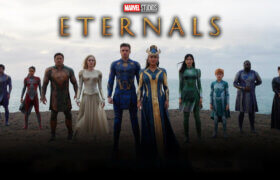 ETERNALS Marvel Cinematic Universe: In April of 2018, Marvel Studios president’s new Marvel Cinematic Universe Kevin Feige revealed a film based on the Eternals comic book and the concept was in development. Eternals is based on a comics series created by Jack Kirby and revolves around a group of superpowered and nearly immortal beings. Marvel enlisted acclaimed The Rider director Chloe Zhao to take the helm. Filming began in Fall 2019 and was completed in 2020.

The film was set for release in November 2020 but was delayed due to coronavirus concerns, first to February 2021 then to November 2021, swapping places in the MCU order with Shang-Chi. The film will also feature Marvel’s first real attempt at including gay characters, as Henry’s Phastos will reportedly be married to a man and raising a child alongside him. After initially losing its November 2020 slot to Black Widow, Disney moved the film to November 5, 2021, during a restructuring of its release calendar in September of 2020. Audiences got their first look at the film in a just-released Phase 4 trailer.

The film will center on an Eternal named Sersi (Gemma Chan) with the powers of flight, strength, immortality, and molecular manipulation. Confirmed cast members include Angelina Jolie, Richard Madden, Kumail Nanjiani, Salma Hayek, Gemma Chan, Brian Tyree Henry, Kit Harington, and Don Lee among others — for this introduction of the titular immortal alien race that has been living in disguise on Earth for thousands of years. Spurred on by a tragedy following Avengers: Endgame, they reunite to protect humanity from their evil counterparts, the Deviants.