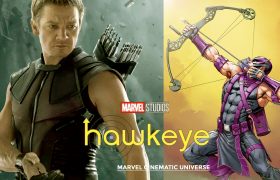 Hawkeye Marvel upcoming series: Jeremy Renner‘s Clint Barton is the last of the original six from The Avengers to get his own Marvel Studios project, and as Black Widow, this one is also about handing over the baton to the next generation – while exploring previously unexplored parts of their lives.

In late November 2020 with the directing team of Amber Finlayson and Katie Ellwood (who go by the directing name Bert and Bertie) and Comrade Detective’s Rhys Thomas, set to helm several episodes. Hailee Steinfeld – long rumored for the part of Kate Bishop – soon appeared in photos and videos from the set. Vera Farmiga was also reportedly joining the show as Kate’s mother Eleanor while Alaqua Cox will play deaf assassin Echo.