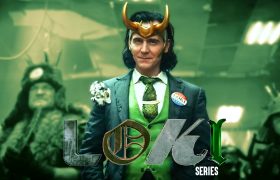 Tom Hiddleston’s LOKI SERIES keeps dying but Marvel keeps finding a way to bring him back. This time around, it’s the Loki we briefly met in Endgame, when Iron Man and Captain America traveled back in time to the events of 2012’s The Avengers. MCU going forward, although Disney+’s Super Bowl ad seemed to suggest Loki will once again find himself in a prison cell. Owen Wilson, Sophia Di Martino, and Gugu Mbatha-Raw join Hiddleston in whatever hijinks his well-known alter ego gets into. As with the other Marvel Disney+ productions, filming was interrupted but there appears to be no great delay in release. In December of 2020

That version of Loki escaped with the Tesseract and his manipulation of timelines has run him afoul of the Time Variance Authority, as the Loki trailers reveal. And because this is an earlier Loki, it means he hasn’t had any of that character growth from Thor: The Dark World, let alone Thor: Ragnarok.

Why Loki Series Marvel Studios chose to make a series about Loki due to his longevity in the MCU—since the character had been around for thousands of years, a series could “fill in the blanks” to his various, unseen adventures and his story potential