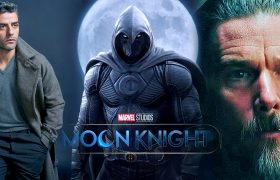 Moon Knight Marvel Cinematic Universe: Many rumors during Marvel’s alliance with Netflix, Disney+ will serve as home to a Moon Knight series. As Feige explained at D23 in 2019, it is an “action-adventure series” featuring the Marvel character Mark Specter. “He was left for dead and he may or may not be infused with powers from the moon god.

Ethan Hawke is the main villain, while Ramy star May Calamawy she is of Egyptian and Palestinian heritage is said to have a “key role”. Feige has said that Moon Knight will be a bit like Marvel’s Indiana Jones, infused with Egyptology and mental illness.