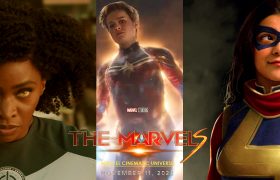 The Marvels Marvel Cinematic Universe: Previous year of January 2020 Marvel reportedly hired WandaVision staff writer Megan McDonnell to begin drafting a sequel to Captain Marvel. Brie Larson will return as Carol, and considering how vital they were to the first film, you can probably expect Samuel L. Jackson and Ben Mendelsohn to return as Fury and Talos.

Monica has also held the Captain Marvel moniker in the comics so naturally all together, they are “The Marvels (Marvel Cinematic Universe) ”.Also, with Black Panther II’s move to July 8, 2022, the film has moved out of its long-held release window of July that year. It is now slated for release on November 11, 2022. In the new Phase 4 video trailer, it was revealed the film will now be called The Marvels.